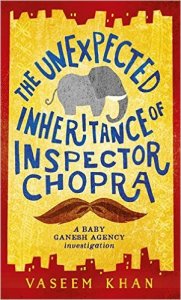 The very first book I’m reviewing here, The Unexpected Inheritance of Inspector Chopra, provides an excellent snapshot of the type of mystery I am always hungry for. I was immediately drawn to the cover, which seemed to promise something in the gently comic vein of Alexander McCall Smith’s Number One Ladies’ Detective Agency series. In my opinion, there are far too few cozy mysteries set in foreign (non-U.S./U.K.) locales.

Inspector Chopra is a bit harder-hitting than the McCall Smith books—for one thing, there are a handful of violent deaths, which rarely occur in Mma Ramotswe’s cases—but it’s likely to appeal to the same readers, thanks to its likable hero and the irresistible baby pachyderm he acquires on Page One. “On the day that he was due to retire, Inspector Ashwin Chopra discovered that he had inherited an elephant,” the book begins. The creature, dubbed Ganesha, came from Chopra’s Uncle Bansi, who noted in a letter that “this is no ordinary elephant.” Just how extraordinary becomes clear later in the book.

Chopra’s retirement from the Mumbai police force was an involuntary one; only in his early 50s, the inspector was ordered to leave because of a heart problem that required him to avoid stress and excitement. Of course, as a policeman for most of his life, Chopra finds that he can’t completely leave the job behind. On his last day of work, the body of a young man is brought into the station, and Chopra’s superior, the Assistant Commissioner of Police, insists he was a drowning victim and that the case be closed. Chopra suspects foul play, but what can he do without a badge or the backing of the force? He ultimately launches his own investigation, trying to keep it a secret not only from the police but from his headstrong wife, Poppy, who would surely disapprove.

Vaseem Khan’s debut novel features a touch of magical realism, but the depiction of Mumbai—a teeming city of over 20 million souls that is home to India’s famous Bollywood film industry—is so well-described that it’s practically a character in the book. Chopra’s investigation takes him from high-end shopping malls to the sprawling slums of Dharavi. Mumbai is also a city with a great deal of corruption, some of it in very high places, which also plays a part in the book.

The ending of the book—as well as its subtitle, “A Baby Ganesh Agency Investigation”—makes it very clear that Chopra will continue to solve crimes, despite his dodgy heart. The Perplexing Theft of the Jewel in the Crown, second in the series, will be released later this year. I’m already looking forward to catching up with Ashwin and Poppy Chopra, but even more so, I want to know how the elephant will help crack the case.