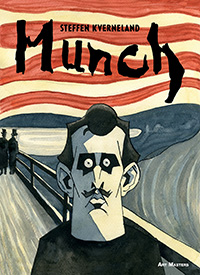 SFMOMA is currently displaying a major exhibit on the Norwegian artist Edvard Munch (1863-1944). The exhibition does not include his most famous painting, The Scream, which is one of those rare works (along with American Gothic, the Mona Lisa, and a handful of others) that has become a pop culture icon. I would imagine that the guards at SFMOMA are tired of people asking them where The Scream is. It doesn’t travel; you have to go to Oslo to see it.

As a Swede, I was of course familiar with other works from Munch’s oeuvre; Stockholm’s Thielska Galleriet has a large collection, including the painting Despair, which is on loan to SFMOMA for its exhibit and is a close cousin to The Scream. What kind of life experience would lead an artist to paint works like The Scream, Despair and numerous depictions of sick and dying people? I thought it might be interesting to read a biography of Munch, and then I saw that Norwegian cartoonist Steffen Kverneland had written a graphic novel about him. Coming in at almost 300 pages, this is a pretty hefty volume and really gives you a lot of information about his life, work and background. 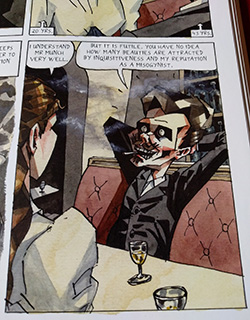 The book takes a non-linear approach, beginning with his 1892 sojourn to Berlin, where he created quite an uproar. His works “were perceived as a direct insult to art, an anarchistic provocation… Munch was viewed as a living example of what would happen to a German painter if he allowed himself to be influenced by the hedonistic French impressionism.” Munch relished the controversy, and quickly became a much talked-about figure. He met Swedish playwright and artist August Strindberg, who becomes a major character in Munch’s life, as well as in this book. I really love the way Kverneland draws Strindberg, all harsh angles and dark shadows. The two Scandinavians developed a friendship, “even though Strindberg was also difficult, obstinate and distrustful… Munch told a friend that Strindberg ‘had the habit of suddenly tripping me, so that I lay flat on my back in the street.'”

We don’t get into Munch’s early life until the midpoint of the book, where we learn his mother died when Edvard was only 5. His father, a physician, became “a disheartened religious zealot” after his wife’s death. “Disease and insanity and death were the black angels that stood by my cradle,” wrote Munch. “A mother who died early—gave me the seed of consumption—a distraught father—piously religious, verging on madness—gave me the seeds of insanity.” To make matters worse, Munch’s sister Sophie, older than Edvard by only a year, died of tuberculosis at the age of 14. Her death became a recurring motif in Munch’s art, including the Sick Child paintings displayed at SFMOMA. By this point, it should be pretty clear why much of his work is so disturbing.

The creation of The Scream is the novel’s climax; Kverneland depicts himself along with his pal Lars as they go in search of the exact location that served as the vantage point for the painting. Then there’s a fun little interlude about the theft of the painting from the Munch Museum in 2004, with the burglars drawn as the Beagle Boys from the Donald Duck comic books. 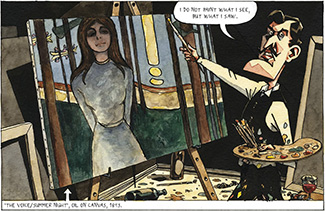 Periodic detours like that ensure that Munch is far from a typical biography, but by the end, I felt I had learned a ton about the artist and I thoroughly enjoyed Kverneland’s stunning artwork. This is an excellent companion piece to the SFMOMA show, and like that exhibition, proves that Edvard Munch deserves to be celebrated for his whole body of work and not just his most famous painting. 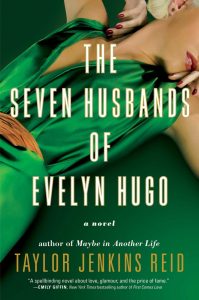 “Who was the love of Evelyn’s life???” That’s the big question… Seven husbands. Which one did she love the best?

Monique Grant is a young journalist who manages to snag the story of a lifetime: a no-holds-barred interview with Evelyn Hugo, bombshell actress of the 50s and 60s who captivated millions with her beauty, talent (she’s an Oscar winner) and dramatic personal life. Now 79, Hugo has outlived all seven of her husbands and wants to tell the truth about what really happened behind the scenes.

Besides “who was her great love,” there’s one huge underlying mystery that is teased from the very beginning of this novel: why Monique? Out of all the journalists in the world, why insist on working with a relative newbie who has worked at Vivant (a Vanity Fair-type glossy magazine) for less than a year? By the end of this spectacularly juicy book, everything has been revealed.

When you think of gorgeous, multi-married Hollywood stars, of course Elizabeth Taylor is the first name that springs to mind, and Hugo may bear some resemblance to Liz, but only superficially. Reid has done a great job of constructing an alternate history of Hollywood, taking us from the old studio system to the French new wave, up through the sorts of family dramas that won Oscars in the 1980s.

The novel is divided into sections named after each of Hugo’s husbands; her first-person recollections are interspersed with chapters about Monique, who is herself in the process of splitting up from her spouse. Of course, compared to the goings-on in Hollywood, Monique’s own story is fairly tame, but the “what is her connection to Evelyn” question really helps power the narrative. (Lest you think it’s anything as prosaic as Evelyn being her long-lost mom, Reid sneaks in some dialogue between Monique and her mother early on that makes it clear that is not the case.)

Considering that we’re still in an era where women directors are vanishingly rare and actresses routinely make far less money than their male counterparts, I loved reading about a powerful, flawed-but-fascinating woman who controlled her own destiny every step of the way, even if that meant using each of those seven husbands to get something she wanted. “Do yourself a favor and learn how to grab life by the balls, dear,” Evelyn instructs Monique. “Don’t be so tied up trying to do the right thing when the smart thing is so painfully clear.” 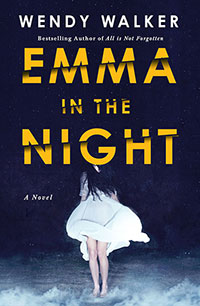 Over the past few years, I have had the misfortune of dealing with a couple of people who I’m pretty certain have narcissistic personality disorder, the subject of Wendy Walker’s new thriller Emma in the Night. These are truly toxic individuals who can ruin the lives of those close to them. For those of us further out in their orbits, the best thing to do is just disengage.

In the novel, Cassandra Tanner is the victim of her mother’s noxious parenting style, which frequently pitted her against her older sister Emma. After her parents’ divorce, 11-year-old Cass made the mistake of asking to live with her father, which sealed her fate: “Don’t ever call me Mother again! To you, I’m Mrs. Martin!” her mom raged. And so Cass “became the outsider… all [she] could do was watch from a distance.”

A few years later, both Emma and Cass disappeared. Until one day, Cass returned alone, recounting how she and Emma had been living on an isolated Maine island with a couple who essentially kept them prisoner. Then Cass drops the bombshell that Emma had been pregnant when they left home, and that she had given birth on the island. The childless couple began to raise the infant as their own, despite Emma’s protestations. Finally, after months of planning and scheming, Cass was able to escape, but unfortunately, she has no idea where the island was located or how to find it. The couple were using fake names. How can she figure out how to get back and save her sister and the child?

First-person chapters narrated by Cass alternate with third-person chapters told from the point of view of Abigail Winter, an FBI agent working on Cass’ case. As it turns out, Abby also grew up with a narcissistic mother, so she identifies deeply with the girl. There are strong hints, however, that Cass is that old thriller standby: the unreliable narrator. Abby needs to figure out which of her tales are true, and which are pure fiction, in order to solve the case and find Emma.

This book should appeal to the many thriller readers out there who love twists, but I found it somewhat hampered by pedestrian prose; Abby’s mind “was spinning… round and round like a dog chasing his tail,” or Cass “just raised the stakes in a game [her mother] didn’t even know she was playing.” Or, “Evil can dress up as love so convincingly that it blinds you to the truth.” That’s not bad writing, just not terribly fresh or insightful. Perhaps it’s more noticeable because a lot of readers (me included) will turn back to the beginning and reread portions of the book once all has been revealed, to see if Walker played fair. I believe she did; the clues are all there, if you look closely enough. 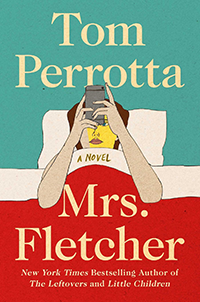 The cover of Mrs. Fletcher depicts a woman alone in bed holding a smartphone, her face illuminated by the screen’s glare. If a copy of this book somehow managed to make its way back to the mid-2000s, the pre-iPhone era, it would seem almost inscrutable; it takes place in a world where people’s lives are ruled by their smartphones, the devices serving as a source of entertainment as well as vehicles for miscommunication and misunderstandings. The only way Mrs. Fletcher could be more up-to-the-minute would be if Tom Perrotta had somehow worked in a reference to Donald Trump’s Tweets. (The novel, presumably written pre-November 2016, takes place in a blessedly Trump-free universe.)

Ambitiously, Perrotta is trying to capture The Way We Live Now, from college students up to retirees. Stuck in the middle is Eve Fletcher, a divorced empty nester whose son Brandon is struggling to adapt to college life. Eve works as the executive director of a senior center, “a place where low-income seniors could come to eat a federally subsidized meal and then get their blood pressure checked by a nurse and their problem toenails trimmed by a kindhearted podiatrist.” She enjoys her job and is proud of the work she does, but at the same time, she feels bored and lonely and in desperate need of a change.

The book features rapidly shifting points of view, switching from third-person sections focusing on Eve and her colleagues and friends to first-person chapters narrated by Brandon. He is kind of a stereotypical teenage lunkhead, far more interested in partying and hooking up than he is in actually learning things or planning for his future. His roommate Zack’s arc is actually more compelling than his own, even though Zack is only a tertiary character in the novel.

Eve also goes back to college to take a gender-studies class, which leads her to make some new friends, though things ultimately go a little sideways, as Perrotta fans might expect. Like most of his novels, Mrs. Fletcher is an easy, breezy read, if perhaps a bit overstuffed with characters (the fact that two of the primary females in the book are named Amanda and Amber caused me a few moments of confusion). Now that the HBO series based on his 2011 novel The Leftovers has come to an end, I’m glad Perrotta has returned to chronicling the highs and lows of middle-class, middle-aged American life.