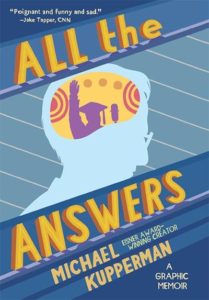 Who were the Quiz Kids? I had never heard of them, but my guess is that the name will definitely ring a bell for anyone who was around in the 1940s and 50s. The Quiz Kids were brainy children who answered tough questions on a radio program based out of Chicago, and eventually a TV show, that ran between 1940 and 1956. It was a phenomenon, especially during the WWII years, when the Kids toured the country to sell war bonds and boost morale.

The Kids hobnobbed with celebrities like Milton Berle, Bing Crosby and Henry Ford. When each Kid turned 16, now more of an adult than a cute child prodigy, he or she “graduated” and left the show. Except for one, the most famous Kid of all: Joel Kupperman, the math genius who first appeared on the show at the age of six and continued until he was in college. Despite his dad’s decade-plus of fame, Joel’s son Michael knew very little about the Quiz Kids years; now a college professor, Joel shunned Quiz Kid reunions and didn’t give interviews, and treated his childhood as a “forbidden subject.”

After Joel is diagnosed with dementia, Michael realizes that it’s his last chance to find out what really happened to his father. An exhaustive search of the family home finally turns up several scrapbooks stuffed with Quiz Kids memorabilia. Michael begins to research the life of Joel Kupperman, kid genius, and makes some disturbing discoveries.

This graphic novel is a quick read, with bold, simple and effective black-and-white drawings, but the author manages to develop a lot of big themes in the book’s 220 pages, including the importance of several of the Kids’ Jewishness (particularly during WWII and its aftermath), the way “special” children were commonly put on display back then (the Quiz Kids had some things in common with the Dionne quintuplets, who were a tourist attraction in a sort of human zoo until they turned eight), and the game show scandals of the 1950s.

Quotes at the beginning of each chapter show what a pop-culture phenomenon the Quiz Kids were in their day. (Pulitzer Prize-winning novelist Philip Roth referenced Joel Kupperman in his 1983 novel The Anatomy Lesson.) All the Answers is often tragic, and constantly fascinating.

3 thoughts on ““All the Answers” by Michael Kupperman”