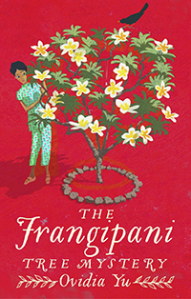 Chen Su Lin is “a bad-luck girl” in the eyes of her family in Singapore. Not only are both of her parents dead, but she walks with a limp, due to a bout of childhood polio. Now the 16-year-old’s uncle wants to marry her off, perhaps so she can become the second wife of a man who’s willing to overlook her faults thanks to a generous dowry. Su Lin, however, is determined to become a professional woman; all she needs is the money to pay for her training.

She seizes an opportunity to look after Dee-Dee, the 17-year-old daughter of Singapore’s English Governor, Sir Henry Palin, after the previous nanny died under suspicious circumstances. Dee-Dee may be a year older than Su Lin, but she is developmentally disabled, and needs constant care and attention. Sir Henry’s second wife, the unpleasant Mary Palin, certainly has no interest in looking after her stepdaughter herself, though sharing her home with an Asian girl strikes her as thoroughly disagreeable. (The dead nanny, Charity, was white.)

Since Charity may have been the victim of a homicide, Government House may not be a safe place for Su Lin, and the local Chief Inspector, Thomas LeFroy, is concerned that she may put herself in further danger due to her amateur sleuthing. But her position on the inside could provide him with vital information… as long as she stays out of harm’s way.

The Frangipani Tree Mystery is full of charm, with a clever and resourceful protagonist and a vividly-drawn setting. This is the sort of book which provides a pleasant escape into another world for a few hours, and I look forward to reading more of Su Lin’s adventures.